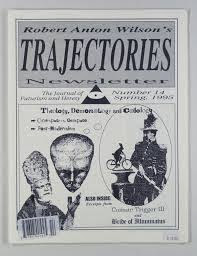 'Trajectories' was the name of Robert Anton Wilson's newsletter which was published highly irregularly. The book "Chaos and Beyond" is a collection of some of the best articles.  Some of the issues would arrive in paper form, as a video tape or as a cassette.  Recently found of youtube were two of the video issues.  In these, RAW talks over a video of an aquarium.

The great fan site Rawilsonfans.com has several of the other trajectories in PDF format.  A great read if you've got time to kill.

Posted by rockinajar at 2:09 PM