Sugary breakfast cereal was really big in my household growing up (part of a well balanced nutritious breakfast of course).  For my brother and I it bordered on obsession. We would argue over who got to decide which new box to open and then who would get to have the box in front of them while eating (providing both entertainment and a 'fortress of solitude' like feel).  It even got to the point where our parents would give us new boxes of cereal for presents on holidays and birthdays (and we would be wicked excited for them).

‘Croonchy Stars’ (the muppets Swedish Chefs cereal) had one of my all time favorite boxes.  It contained games, puzzles (some unsolvable) and other humorous readings which would occupy my attention while spooning in the copious amounts of early morning 'cinnamonnamony' sugar. 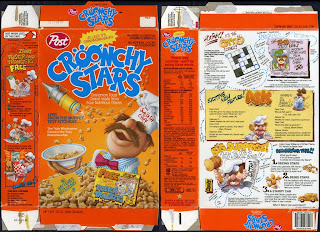 Some of my all-time favorites were the cereals that wouldn’t even pretend to be nutritious.  With a name like ‘Sugar Smacks’ (which later changed its name to the more wholesome ‘Honey Smacks’) you knew what you were getting yourself into. And then there were two of my favorites, ‘Cookie Crisp’ which allowed a child to eat mini chocolate chip cookies for breakfast and ‘Ice Cream Cones’ which also took the concept of a sugary desert and turned it into a ‘nutritious’ breakfast cereal.

‘OJ’s’ could have been one of the worst ideas for a cereal.  Orange juice and milk just don’t mix that well together.  I guess that's why they didn't last that long :(.


Even though the 'Crispy Critters' commercial claimed that it was 'indubitably delicious', I mostly remember it as not being very good.  Though, the annoying commercial jingle did stick in my head.  Indubitably.