A trip down the weirdness path

I've been reading 'High Weirdness' by Erik Davis.  The books tag line:  Drugs, Esoterica and Visionary Experience in the Seventies sums up the strangeness of the book.  In exploring these concepts, Erik Davis focuses on three of my favorite authors (Robert Anton Wilson, Philip K Dick and Terence Mckenna).  The book is dense, but I am really enjoying it. 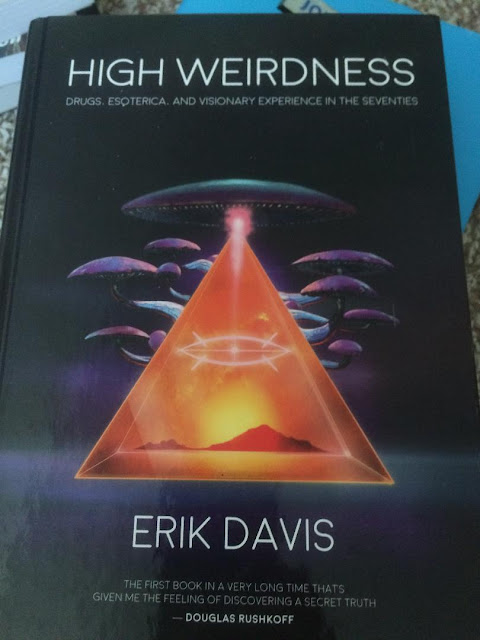 In discussing the strangeness of quantum physics, Erik Davis mentions that it was a 1976 issue of Analog magazine that first drew the public's attention to Hugh Everett's 'many-worlds' interpretation of quantum foolery.  That lead me (in this world) to googling around in which I discovered that the 1976 issue with the aforementioned article was the December issue.  With that knowledge I ran to Ebay and found that I  could purchase that issue.  Of course I couldn't just buy that single issue when someone was selling a lot of 21 different issues, including the one I was looking for! 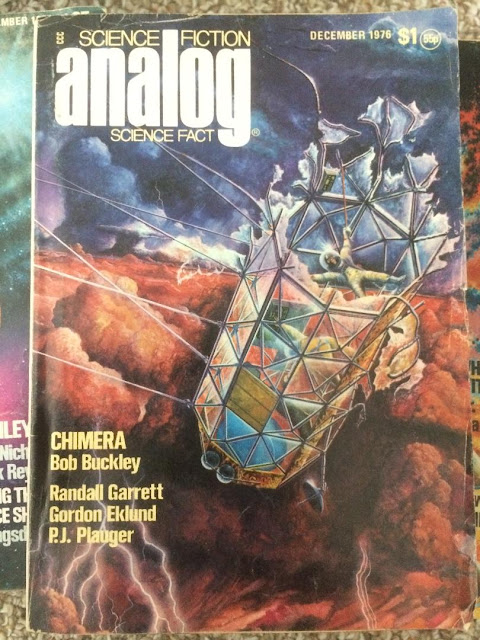 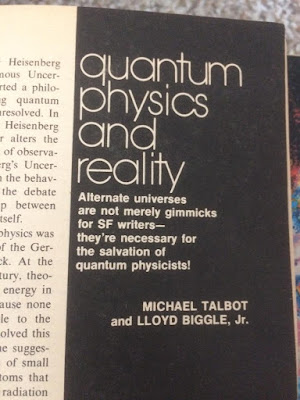 The article in question. 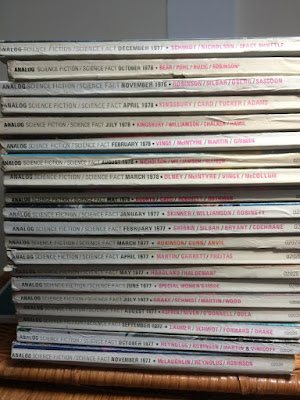 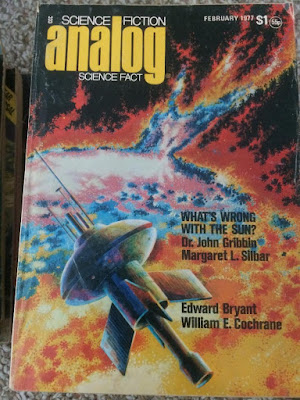 Dug this cover by Mike Hinge from February of 1977.

Anyways, I am looking forward to exploring these worlds of wonder.  Thanks Eric Davis for leading me down this path, I look forward to some further discoveries.

"The possibility of 10^100+ universes, all imperfect copies of each other and all totally unaware of each other's presence, has awesome implications. Here is a system of parallel or alternate worlds beyond the manipulative skill of any science fiction writer. [editor's note:  I feel Robert Anton Wilson did a good job with this in his Schrodinger's Cat trilogy.]  In Schrodinger's experiment, for every cat that survives in our universe, in another universe one dies.  Not only does every quantum mechanical event in our universe cause an indefinite - a number so incomprehensibly large that it cannot even be called infinite! - number of divisions, but perhaps all possible realities exist simultaneously.  In such a garden of the forking paths, the solution to the dilemma of indeterminism may be a universe in which all possible outcomes of an experiment actually occur." - Analog December 1976 'Quantum Physics and Reality' by Michael Talbot and Lloyd Biggle Jr.

High weirdness indeed.
Posted by rockinajar at 11:29 AM